Richard Dawkins, where did it all go wrong?

.@RichardDawkins Richard, Richard, where did it all go wrong…? In 1976 you wrote The Selfish Gene—a book I believe everyone should read…

.@RichardDawkins …and you invented the concept of the meme! — Jonathan Waring (@jonathanwaring) August 2, 2013

.@RichardDawkins …I hope the former, but intellectually that should still be pretty embarrassing for you, no?

.@RichardDawkins I like to think you got so wrapped up arguing with the ‘Jehovah’s Witnesses’ at your door you lost all sight of all else…

Function is a testing ground for experimental and collaborative ideas. A series of events, where Reactor act as curatorial body, bringing together a number of artists to develop objects, installations and performances; creating an all-encompassing ‘total experience’ that consumes its participants (both artists and audience) and challenges them to take an active role in how the event unfolds, where choices and behavior decide the shape of the experience.

Prising open the doors of a disused and dilapidated building, Reactor invited participants to enter, navigate its confined space, and help bring Function back to life.

On Saturday 20th of October, as the evening gloom settled over Nottingham, I was on hand to document. Here are some of my images from the event: 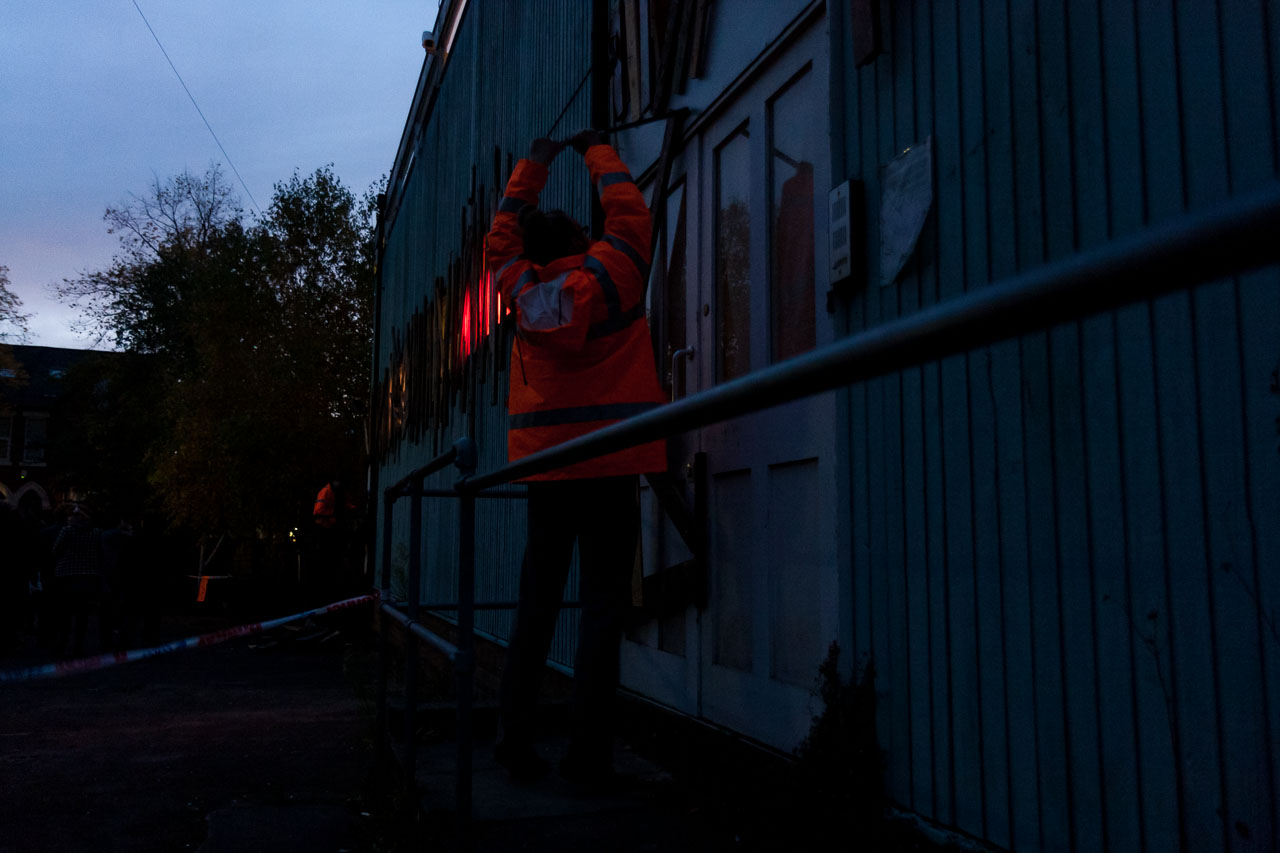 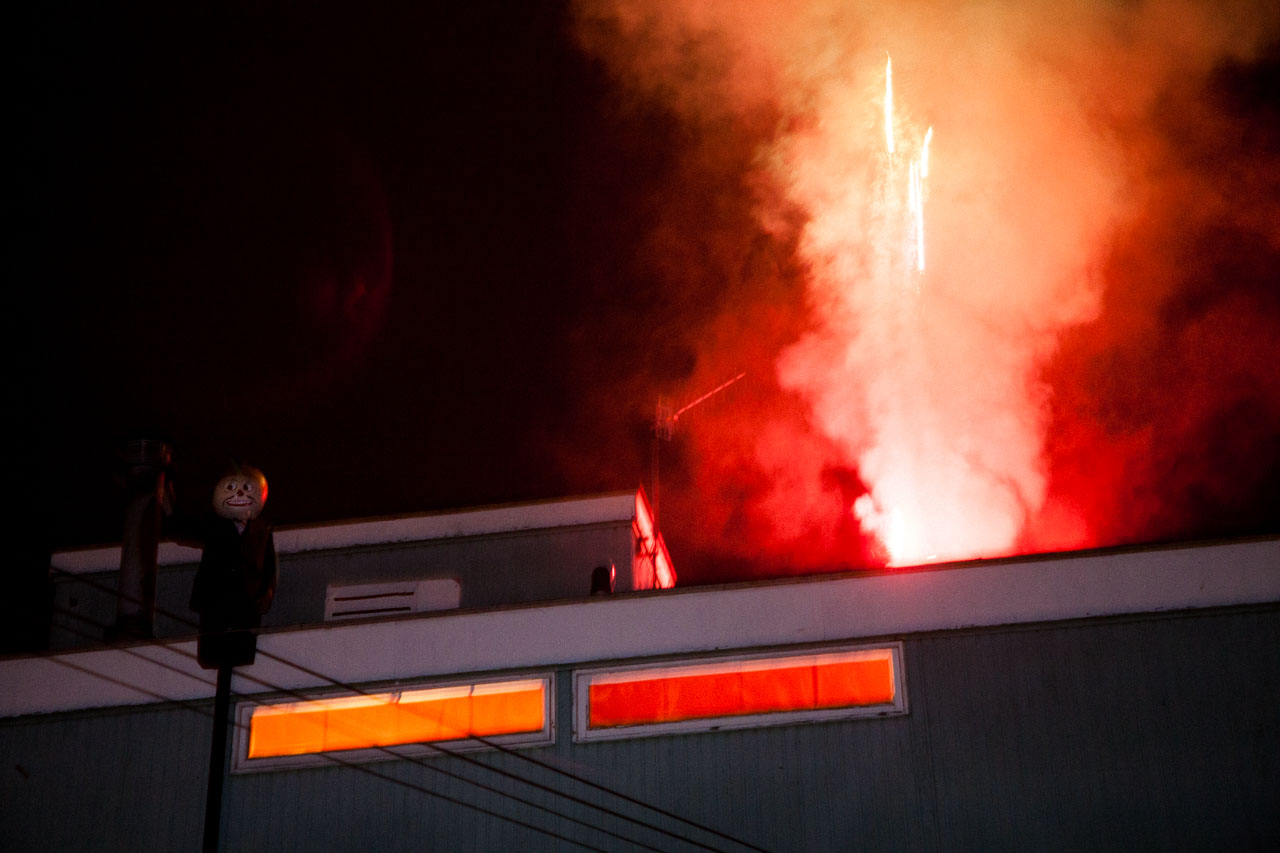 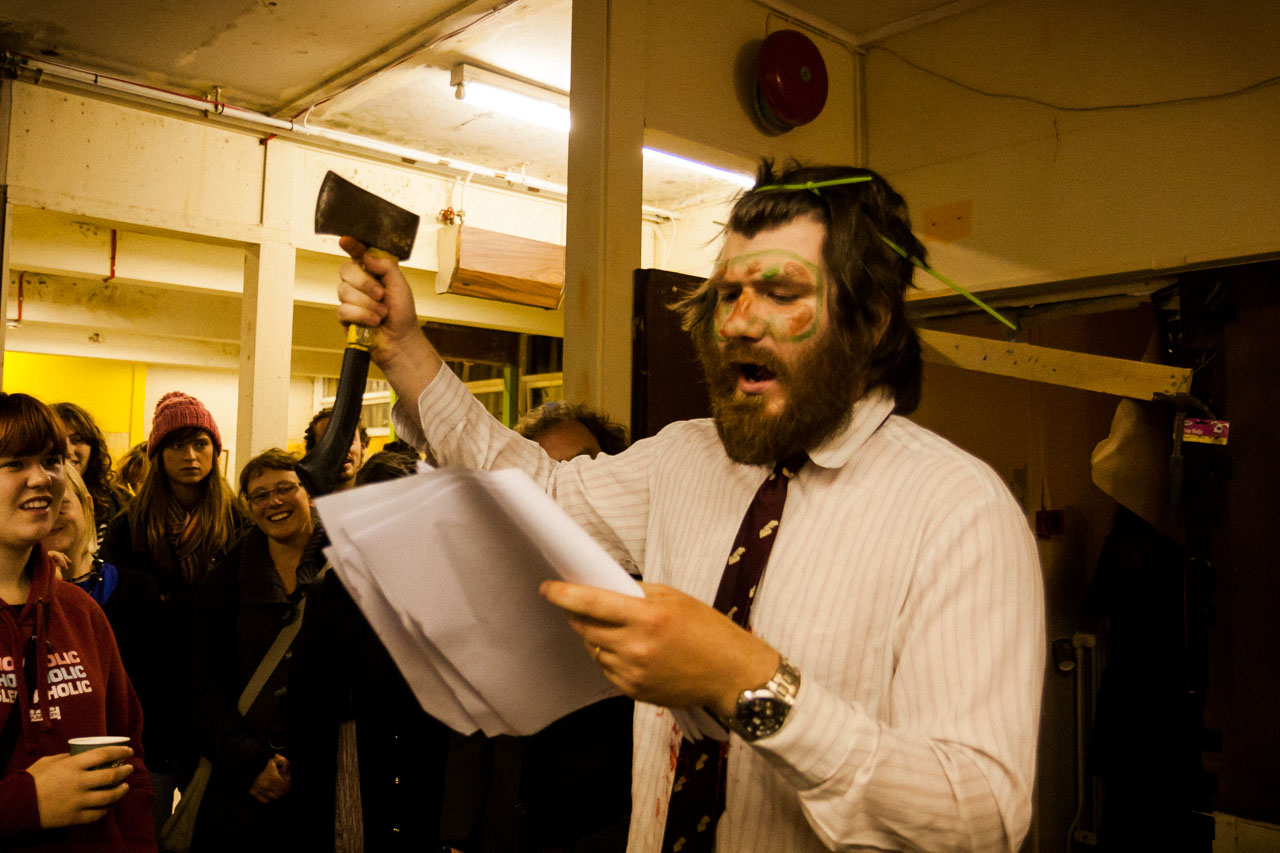 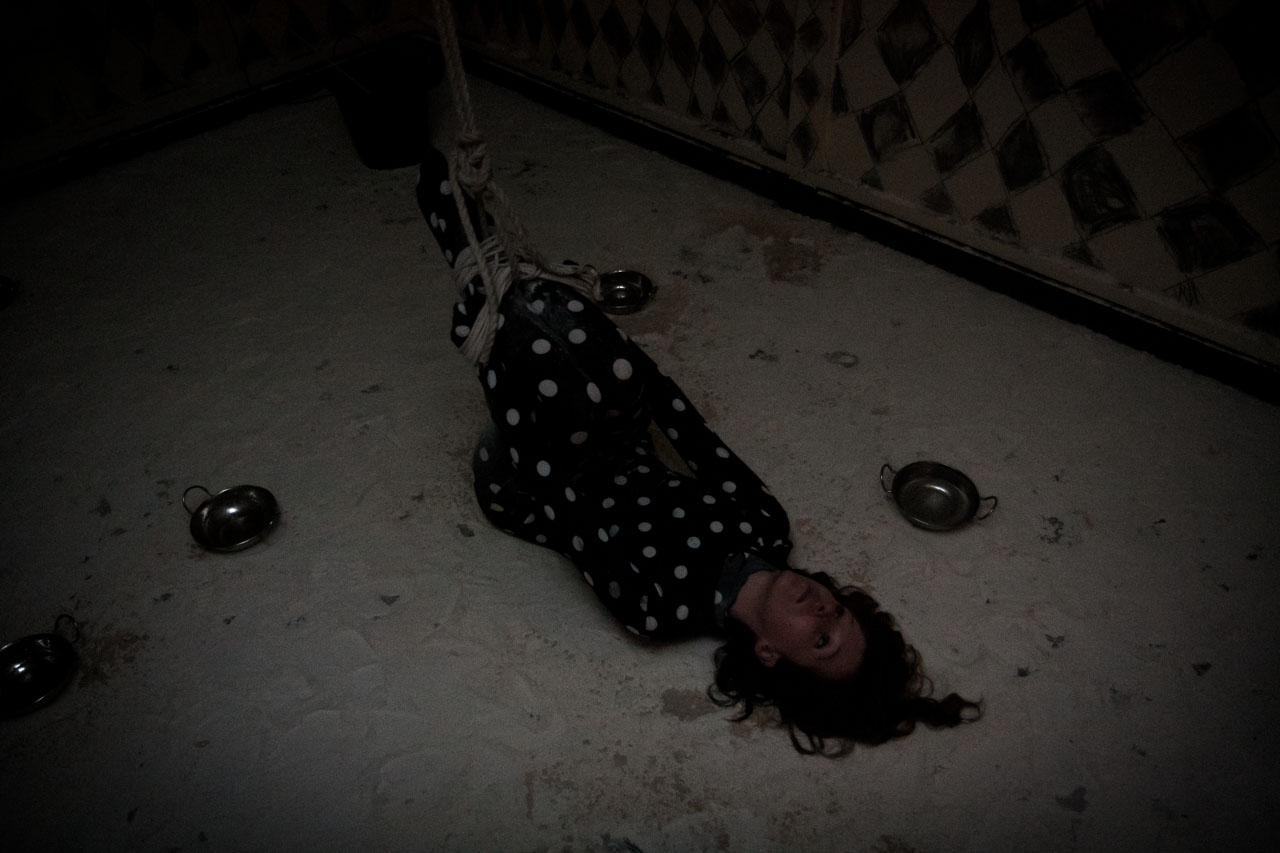 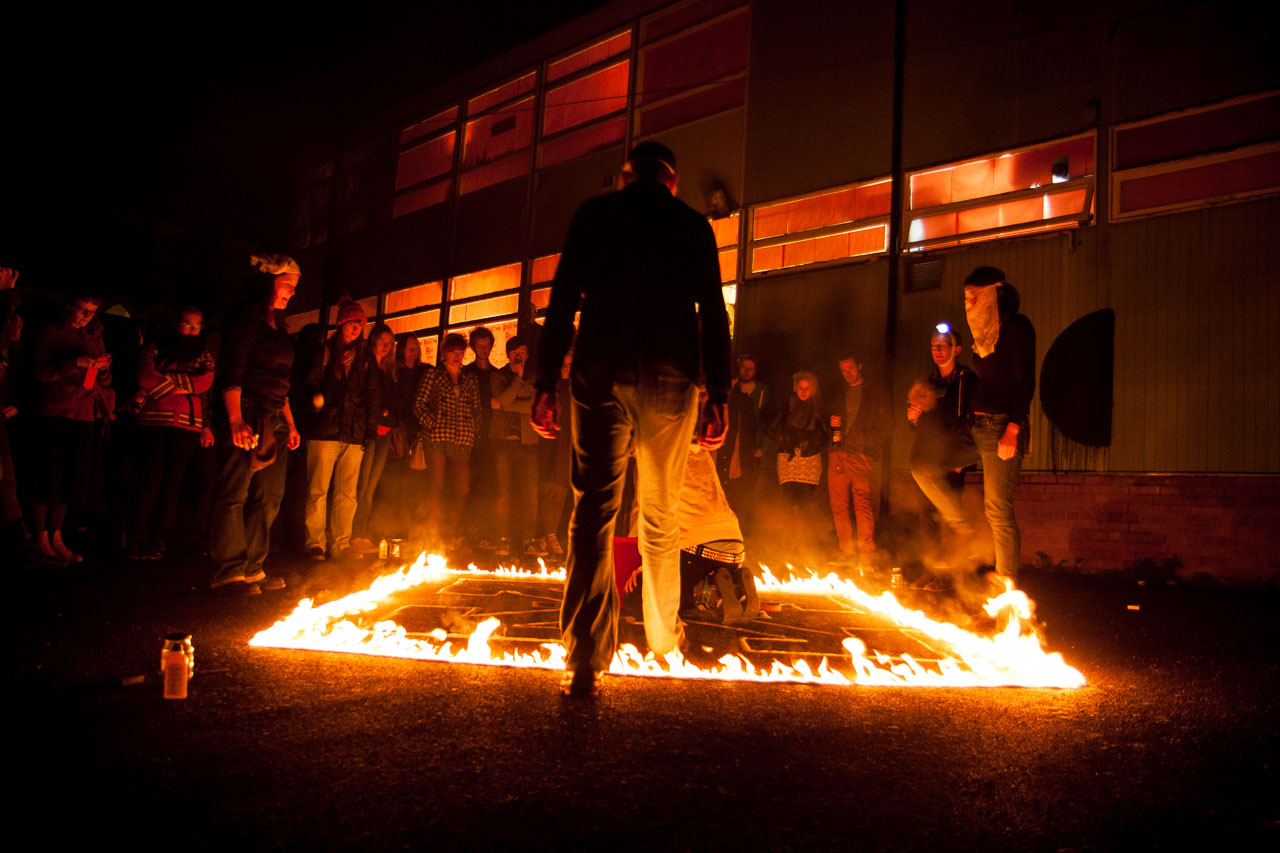 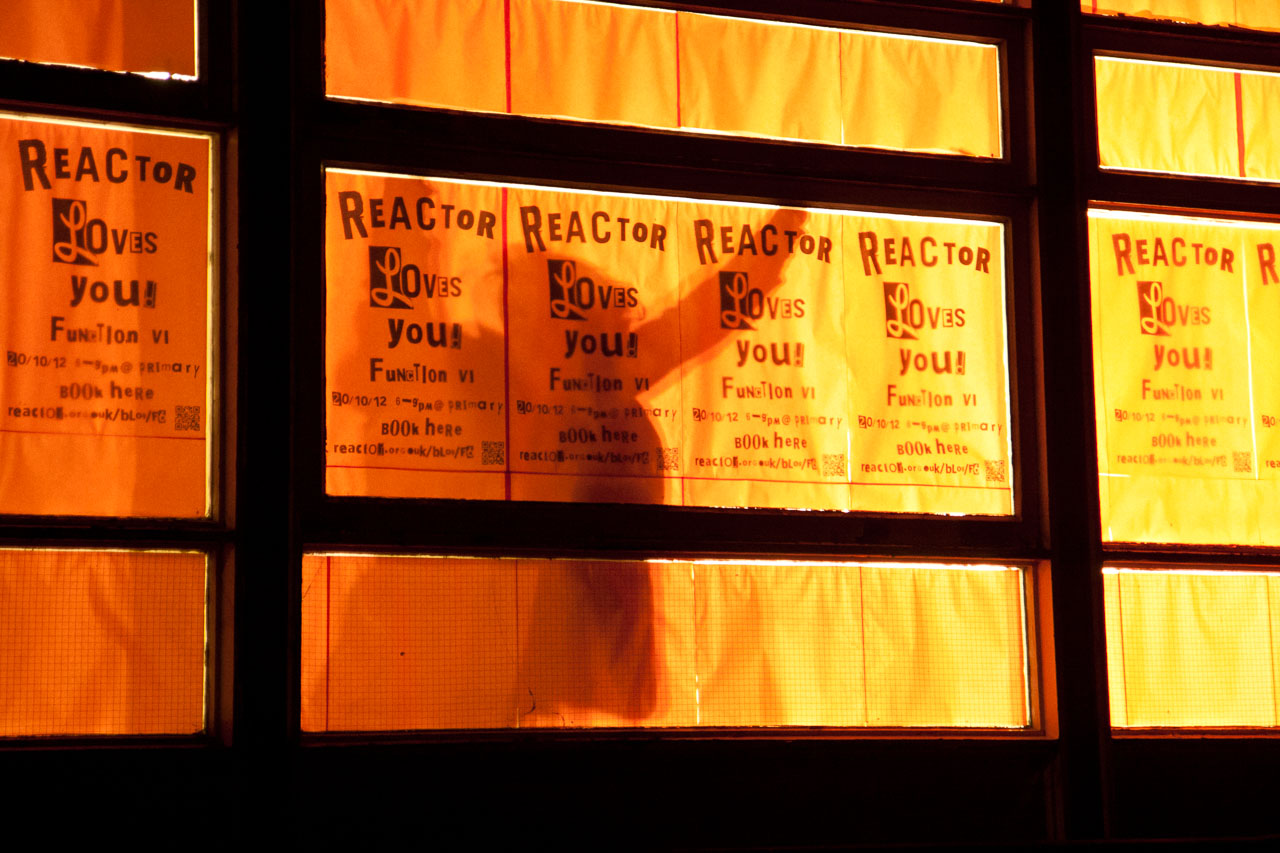 Further events up to Function X are in the works.

On Wednesday 5th I visited The Developing City, an exhibition documenting the changing configuration and architecture of the City of London, from its Roman origins through present day construction, before speculating on its future development up to 2050.

Looking east along the Thames toward the City circa 2050?

Yesterday I recorded a number of my scathing thoughts about their 2050 vision in a series of tweets. Today it occurred to me that this ‘mini-review’ could be recorded on this blog  (update 8th Sept: this function is erratic, so I eventually gave up and decided to use the html embed codes generated by Twitter itself—see comments below). So, here we go:

Visited #developingcity exhibition at the Walbrook yesterday. Nice architectural models. Hilarious vision of the City of London circa 2050.

Some weird pre-2008, New Labour, CSR fantasy. Art & cultural quarters, greenery on the Thames & a wind turbine or two will save us.

Guys, the future will *not* look like that. At best it will look totally different (aka #fullcommunism), at worse…

Lots of big developers & City of London Corp sponsoring—0% corporation tax zone exactly what we need then—who would that be to benefit, eh?

The future vision part seems to come from architecture / store-design firm Gensler. There’s an iOS app of their vision: bit.ly/Od61qp

LOL, Gensler ‘2nd largest architecture firm in the US’ has flash-based website. And you’re predicting the future for us, are you? Dream on.

But looking into the future, a grim chuckle is the best you’re going to get. #developingcity

So, that’s my little experiment with Twitter Embeds. They could be put to more interesting use recording discussions, such as this Twitter conversation I documented manually a few years ago. However the authenticity of using the ‘actual tweets’ would need to be balanced against the possibility that the tweets, or the tweeting account, might be deleted at some point in the future. 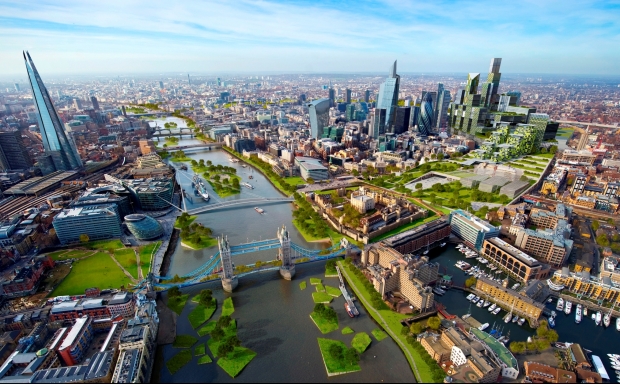 A new financial centre at Aldgate, set within a landscaped ‘high park’…

Sunday Lunch at The Green Man

Here are some of the photographs that I took at Reactor’s The Green Man & Regular Fellows. The event took place in Nottingham across Friday, Saturday and Sunday evenings of the last weekend in September. In honour of traditional pub opening hours The Green Man also had a Sunday lunchtime opening, where I took these photographs, featuring a pub quiz with a Harvest Festival hamper prize.

I only briefly stopped by the The Green Man on Friday night, before heading off again for a friend’s birthday meal. But I was there all night Saturday (including the lock-in), for Sunday lunch, and then back that evening for last orders.

Scroll to the bottom of the post for reviews by Aaron Juneau and Jack Vickers. 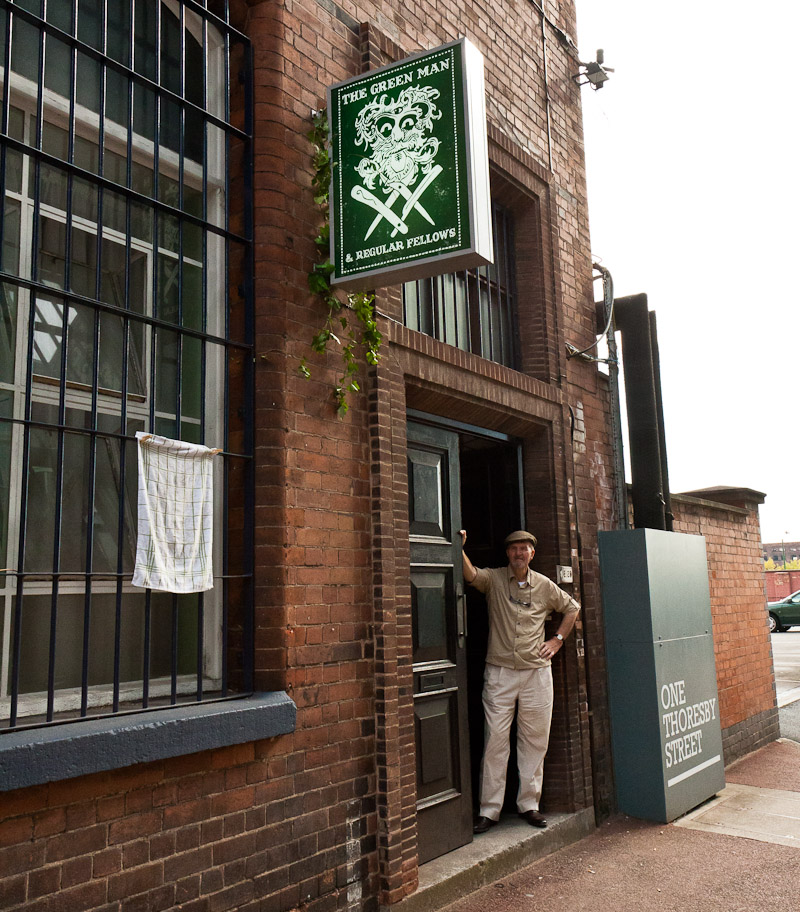 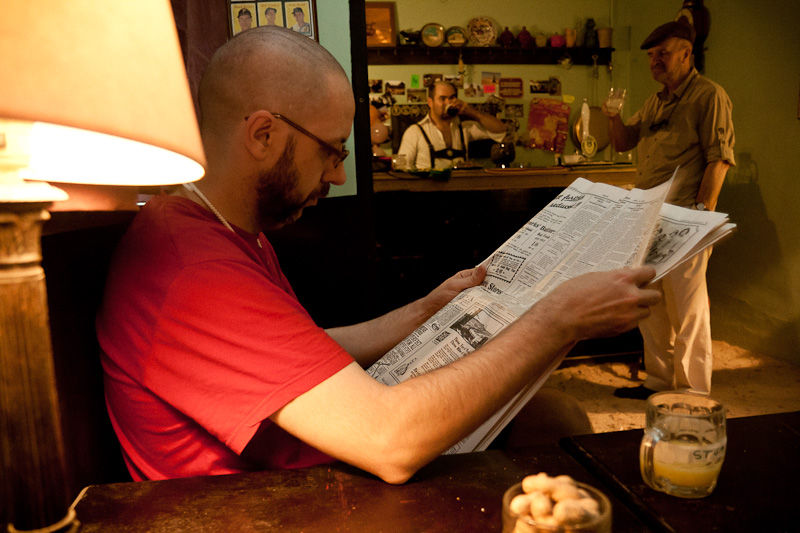 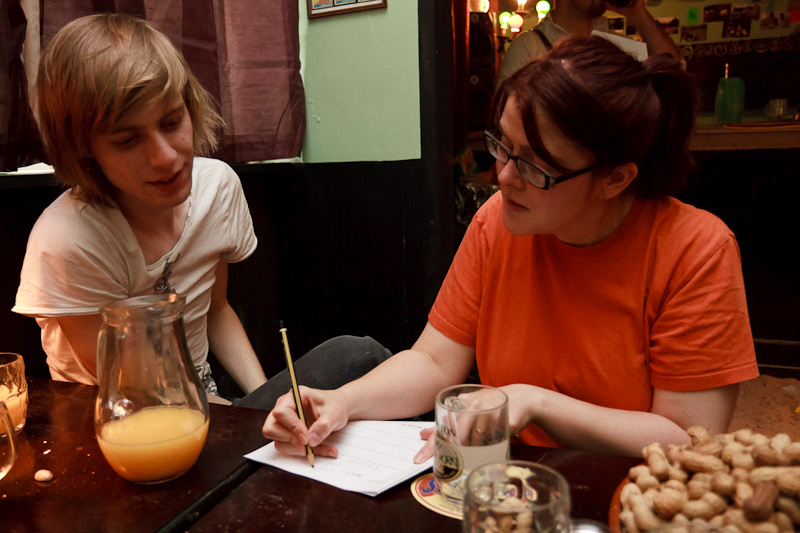 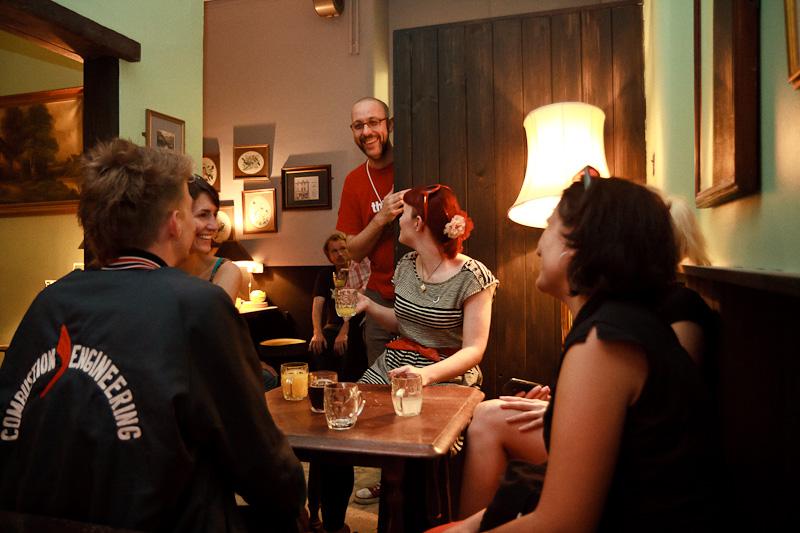 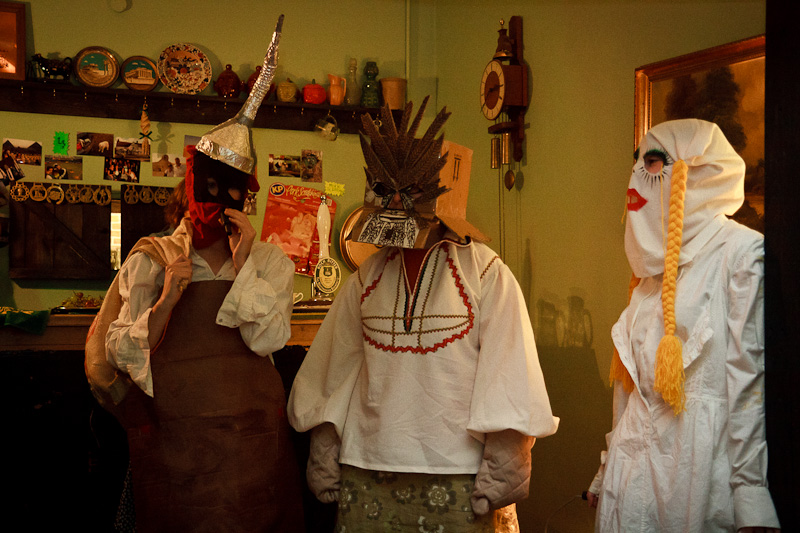 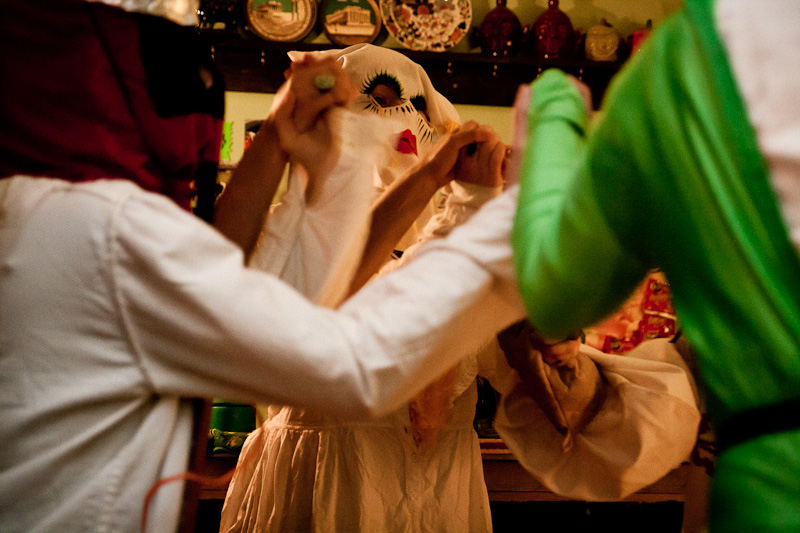 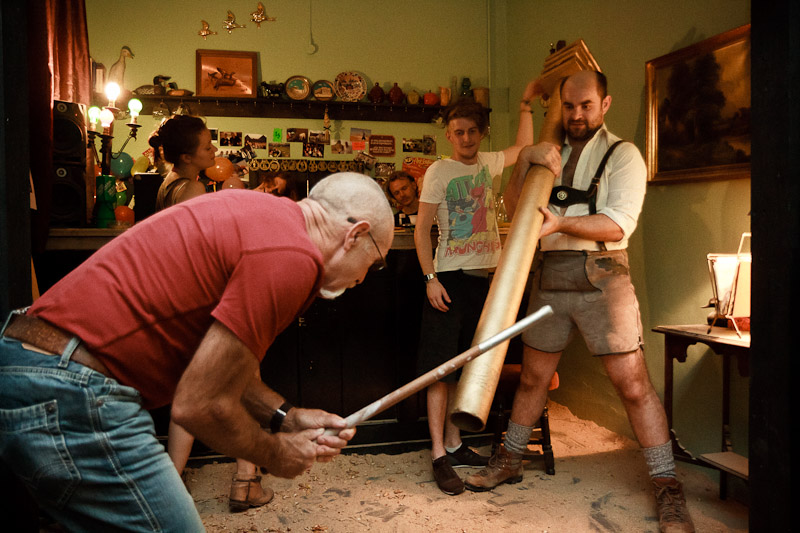 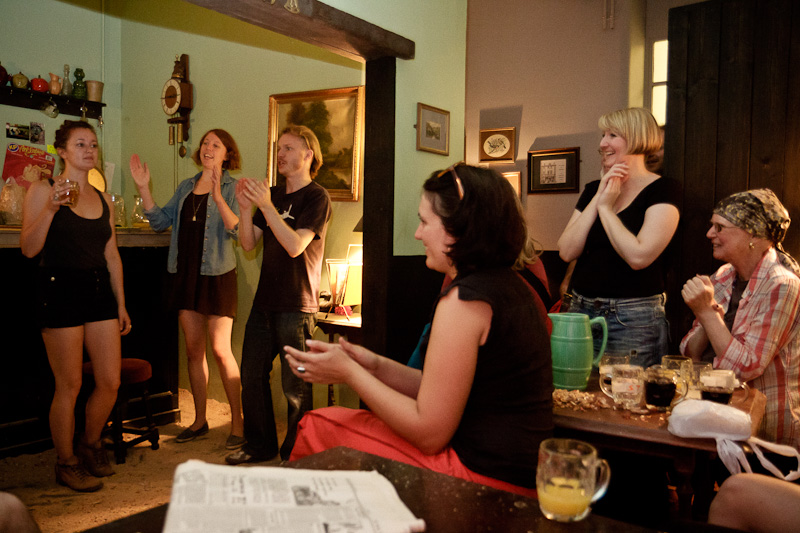 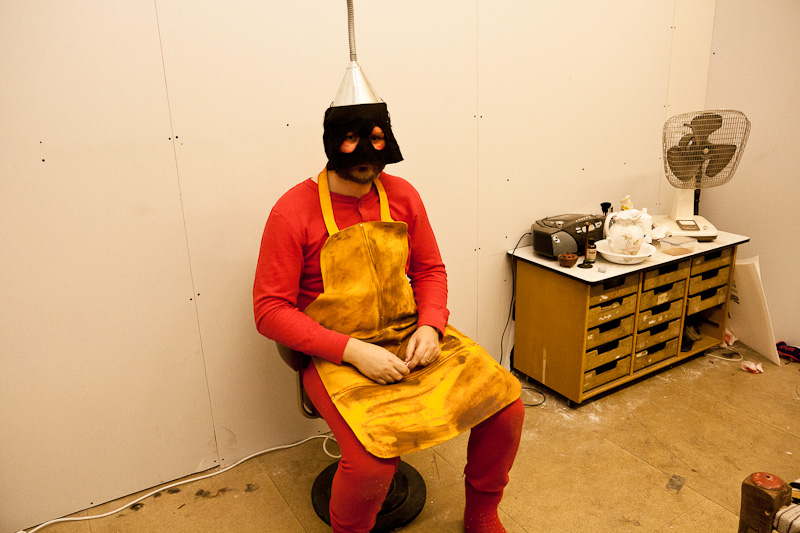 The Green Man & Regular Fellows is a newly commissioned, live artwork in the form of a pub, complete with adjoining function room. Here Reactor’s interest in the the nature of membership as a social construct manifests itself in a series of temporary groups and levels of fellowship. The structure of the work plays with the traditions and conventions of the ‘public house’ and ‘private members’ clubs’, producing unexpectedly dis lodged behaviours.

This brief materialisation of The Green Man & Regular Fellows presents a set of mysteries, inviting speculation about its symbols and purpose. Where did it come from, and who is it for? The Green Man & Regular Fellows offers membership, invites you in for drinks and provides a rich environment of song, laughter and games. As the Landlord calls upon the Regulars to lend a hand and the more Irregular members burst out of the back rooms, the atmosphere increasingly becomes more intense and behaviours more frenzied. It will soon become clear why our Regular Fellows like to come back time and time again.

With yesterday’s change in WordPress theme (from my adaptation of veryplaintxt to LightWord), and a number of other less obvious changes and improvements, I’m finally declaring jw.net out of beta with a v1.0 designation. For the sake of posterity, this is what the site looked like up to v0.7: 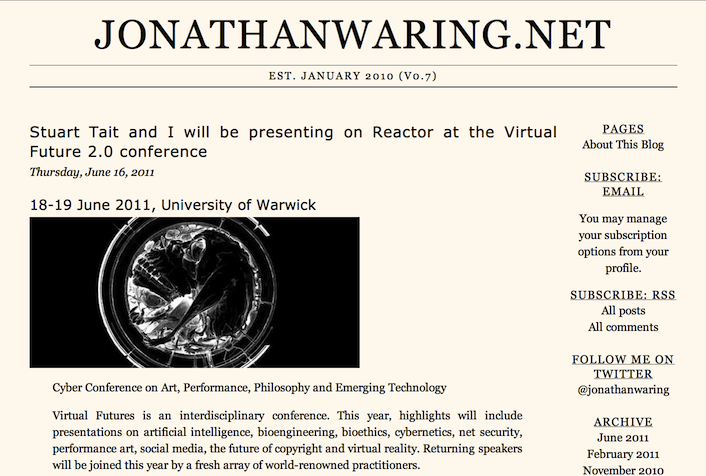 Stuart Tait and I have been asked to make a presentation on Reactor at the Virtual Futures 2.0 conference. Here are some details of the conference from their website, and a little on what we have planned:

And here’s our abstract:
http://virtualfutures.co.uk/vf2011/programme/reactor-assemblages/

Reactor’s practice creates ‘microcosmic worlds’ that thematically draw upon recognisable social forms, such as totalitarian states or self-help groups, in what artist and writer David Burrows refers to as ‘performance fictions’. These new collectivities are then performed or enacted in collaboration with audience-participants who take up positions within the work.

The presentation will begin by considering Reactor projects as ‘assemblages’, drawing upon the writing of Gilles Deleuze and Félix Guattari, and Manuel DeLanda’s development of their work in his Assemblage Theory of society. Erving Goffman’s concept of ‘role adjustments’ will then be used to discuss the way participants’ change positions within a project as it is enacted. The presentation will explore the relationship between the project, as it is actualised, and its virtual dimensions, such as the characteristics of a particular role, back-story for the project, memory, or project planning. Finally, Deleuze and Guattari’s concept of the diagram will be discussed in relation to Bergson’s cone diagram and the counteractualisation of the project back into the virtual of co-participants’ minds.

My photography portfolio website jonathanwaringphotography.co.uk now has its own hosting. Prior to this it lived in a sub-directory here at jonathanwaring.net. This caused various problems with the way it appeared in Google (and other) search listings, prompting the move.

The site documents some of the professional photography work I have done for clients. I initially worked documenting art gallery shows and live art events, before broadening my scope to produce images for a wider range of clients.

Please take a look if you have the time.

Daniel Oliver will be present a paper discussing ‘The efficacy of insincerity in Big Lizard’s Big Idea’ as part of the one day symposium ‘A Make Believe World’ during this year’s Sacred Festival.

In one of last month’s posts I outlined Reactor’s pivotal 2005 work Total GHAOS. A work which came to define the group’s interests and mode of practice, as well as—more personally—marking the beginning of my four-year immersion in this practice as a member of the collective. Big Lizard’s Big Idea was the final project on which I worked with Reactor. Initially co-commissioned by the Donau Festival (Austria, April-May 2009) and Wunderbar Festival (UK, November 2009), the project then happened a third time without my involvement at Schirn Kunsthalle’s ‘Playing the City 2’ (Germany, September 2010).

Daniel’s paper will, “…evaluate the efficacy of Reactor’s practice of ‘relational insincerity’ by comparing the performative force of our behaviour as participants in the Big Idea with our behaviour towards the ‘big Other’ of liberal capitalism. This comparison employs Slavoj Žižek’s elaboration of ‘the performative force of ideological illusion itself’, and David McNeill’s discussion of ‘Corporate Sincerity’ and ‘Pragmatic a-sincerity’”.

Unfortunately I am unable to attend the symposium due to other commitments, but the outline Daniel has sent me is intriguing and I look forward to reading the paper in full. Hopefully—with Daniel’s permission—I will be able to reproduce and discuss it here in more detail in the future.

A full programme for the symposium can be downloaded here and booking information can be found here.

Yesterday someone was clearly intrigued enough by part one of Summing Up: Žižek and Environmentalism (Sunday, October 3, 2010) that he or she made the—admittedly fairly small, but still somewhat flattering—effort to induce that the URL of the draft of part two would be the same, but end in ‘part-2’. (It doesn’t anymore.) Whoever you are (from Allendale, Michigan USA—if Google Analytics is to be believed), I hope what you read doesn’t put you off coming back for the finished version. This second part is still only at a very early stage and is mainly notes, the final series will likely reach three parts.

For those not quite so eager—but now feeling left out—part two moves across Žižek’s occasional, put unfortunately pervasive, tendency toward a loose use of anecdotal evidence (particularly in his use of scientific anecdotes), before focusing on an exploration of two of the five ‘mass extinction’ events in Earth’s history: the more well known ‘K-T extinction event’, and the—to me, far more fascinating—‘late Devonian extinction’. They are both interesting enough in their own right, so, if you’re curious, why not look them up on Wikipedia right now? Otherwise, please be patient for the next part of my post.

In the meantime, here is a recap of my two previous posts on Žižek and his perspective on environmental matters, which form the background to the current series: